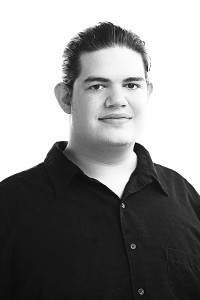 Luke Angelo is a regularly featured soloist with the Second Presbyterian Church Adult Choir in Little Rock, Arkansas. He has toured internationally with the choir and has served as the tenor section leader since 2010. His recent work for Praeclara includes performances as Count Dracula in Dracula Unearthed (2015), the title role in Peter Grimes (2014), and the role of Patrick in Carmina Burana (2014).

From 2008 – 2013, he studied voice at the University of Arkansas at Little Rock, where he performed with the UALR Opera Theatre, the UALR Concert Choir, the UALR Community Chorus, and the UALR Chamber Choir. His operatic experience includes major roles in Menotti’s Amahl and the Night Visitors, Gilbert and Sullivan’s H.M.S. Pinafore, Humperdinck’s Hansel and Gretel, and Sondheim’s Into the Woods, all with UALR Opera Theater. Soloist credits include performances in UALR’s 2012 production of Handel’s Messiah and UALR’s 2011 production of Vaughn-Williams’s Serenade to Music.