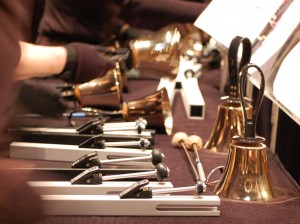 The Praeclara Ringers are an ensemble of advanced adult handbell ringers. Each member has years of experience and training, ringing in one or more bell ensembles at Second Presbyterian Church of Little Rock or elsewhere in the state. Praeclara Ringers  participate in additional rehearsals and intensive workshops in order to present music of the highest sophistication to central Arkansas audiences. 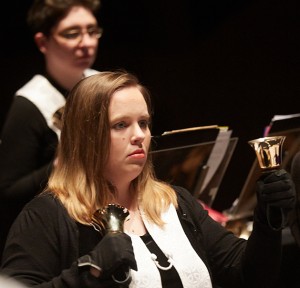 During their inaugural 2014 – 15 season, the Praeclara Ringers performed the handbell preludes for both Messiah by Candlelight and Dido and Aeneas. During the 2015 – 16 season, they were featured at Wildwood Park for the Arts during the pre-show activities for Dracula Unearthed (where they were billed as the “Dead Ringers”), and they also rang as part of our spring 2016 concert, Messiah: Passion and Resurrection. Most recently they performed at the Wildwood Park for the Arts as part of Praeclara’s performance of The Wizard of Oz, were the featured ensemble in “Merrily Ring” during Winter Festival 2019 at Wildwood Park, and are offering a summer social distancing experience and virtual concert for June/July of 2020.

Membership in the Praeclara Ringers rotates for each performance. If you are an experienced handbell ringer interested in auditioning to participate in a future concert, please contact Mary Ibis at maryjibis@gmail.com.

Members of the Praeclara Ringers (Summer 2020):

Mary Ibis is the founding director of the Praeclara Ringers. Currently the Associate Director of Music at Second Presbyterian Church in Little Rock, she has been involved in handbells and church music for 20 years. Mary earned her Bachelor’s Degree in music education from Henderson State University. She has served as a clinician for handbell ensembles of every age and ability across the country.