If all great works of art are open to more than one interpretation, this is particularly true of Henry Purcell’s Dido and Aeneas, his only true opera.

First performed in 1689, the opera is loosely based on the most celebrated episode of the Aeneid, an epic poem composed by Vergil in 19 BCE to celebrate the recently expanded Roman empire. In this greatest of all Latin works, the legendary hero Aeneas, homeless since his native Troy was sacked by the Greeks, sails the Mediterranean without clear purpose until he learns that the gods have chosen him to become the founder of Rome. In the course of his travels, Aeneas stops in Carthage, where he has a passionate love affair with the recently widowed Queen Dido. Once he learns that the gods have assigned him another, more glorious fate, however, Aeneas dutifully abandons Dido, whereupon she kills herself in rage and despair. This romantic tragedy was popular enough to have been retold in many versions by the time that Purcell and his librettist, Nahum Tate, set out to retell it in operatic form. Although faithful to the outlines of Vergil’s story, the opera plot departs from the plot of the Aeneid in two significant ways. First, instead of committing suicide, Dido simply dies of grief once she realizes that she cannot overcome the forces of destiny; second, the opera replaces the gods with witches, who, rather than plucking Aeneas from Dido’s arms so that he may found Rome, seek the destruction of both protagonists.

One reason this celebrated opera is open to many interpretations is that we know little about Purcell and Tate’s artistic intentions. One motive, surely, was to engage the audience in a moving story of broken love that had captured the hearts of countless readers and audiences for seventeen hundred years. As the success of Shakespeare’s Romeo and Juliet had demonstrated, star-crossed love affairs make for gripping drama.

But this could hardly have been the only purpose of the opera, because like most musical works of this period, Dido and Aeneas was composed with a particular venue in mind. In this case the intended venue was not the public stage, but rather a school of “young gentlewomen” overseen by the dance-master and choreographer Josias Priest. The choice to cater to the moral edification of young gentlewomen, not the amusement of a rowdier public, readily explains why the purpler passages of Vergil’s original text were cut from the libretto. Indeed, the libretto barely alludes to the consummation of the affair, while vividly dramatizing the dangers of illicit love, in particular the fickleness of men. It is ultimately left to Dido to order the waffling Aeneas to leave after she learns of the escape plans the “hero” has hatched, but lacks the will to execute. Despite her lapses in judgment of character, Dido emerges as the much stronger figure in the opera, a figure from whose tragic end young gentlewomen might learn some useful lessons.

The case for viewing Dido and Aeneas as a morality tale is strong. However, one end remains untied: Why do scheming witches replace the gods of the Aeneid? What do the witches represent? And why are they so determined to wreak destruction on the lovers? Perhaps the witches were written into the opera simply to entertain English audiences of this time, who, as the runaway success of Shakespeare’s Macbeth illustrated, greatly enjoyed seeing conspiring witches—at least on stage. 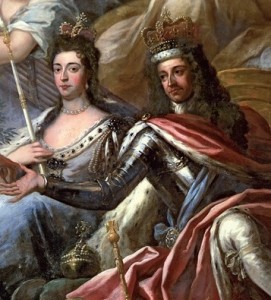 But there is another interpretation that may make more sense and is certainly more intriguing. Some scholars argue that the opera, composed just after the Catholic king James II was deposed and replaced by the Protestants William and Mary, was in reality a political allegory on the so-called Glorious Revolution of 1688. This interpretation is not as far-fetched as it might seem. Plays, operas, and other entertainments of the period were laden with references to contemporary political personalities and events, and Purcell, who had composed extensively for the court of the recently deposed James II, might have wanted to prove that his loyalties had shifted to the new Protestant regime. If so, then Aeneas might be a stand-in for William and Dido for Mary, both of whom, like Aeneas in Carthage, had arrived in England by sea. And what of the witches, who unlike the gods in the Aeneid, trick Aeneas into leaving Carthage so that he might be destroyed? Almost certainly, they are reconfigurations of the dreaded Jesuits, whose alleged conspiracies against the English Protestant order had become the source of near-obsessive fears in the age of Purcell and Tate. In sum, the opera might have been meant as a political allegory preaching the “happy fate” of “monarchs” who “unite,” while warning England of Jesuitical “witches” who find “delight” in doing “harm” by means of “mischief all [their] skill.”

Does one have to choose among these interpretations? Certainly not. Dido and Aeneas is great enough a work to accommodate them all.